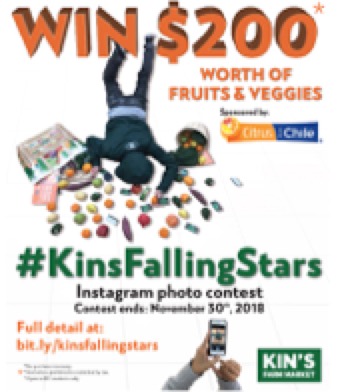 In #FallingStarsChallenge”, young people stage falls out of luxury cars and private jets, with luxury items scattered around them. While it started in Russia, the trend has become global and has found great popularity in China. According to The Guardian, it had received more than 2 billion views on China’s popular micro blogging website, Weibo, as of October 2018.

Kin’s contest with Citrus from Chile offered a healthy spin on the challenge. Consumers were required to take a photo of a friend, colleague, family member or themselves posing with “#FallingStarsChallenge”. The photo also had to include Chilean mandarins and be posted on Instagram. Three lucky winners were randomly selected this past December, with $200 worth of fresh fruits and vegetables awarded by Kin’s.

Diana Gonzalez, Marketing Manager for Kin’s, states, “At Kin’s Farm Market, we love to try new and unique online promotions. For us, “#FallingStarsChallenge” was a great fit. Not only was it trendy and new, it also promoted the idea of a “healthy fall” with Chilean Mandarins and communicated the message that health is wealth. In partnering with Citrus from Chile, we strengthened brand and product awareness, enhanced online engagement, and created excitement in the Vancouver, British Columbia, region.”

Citrus from Chile also produced a custom video direct from a Chilean mandarin orchard for Kin’s to play in their stores.

Steve Hattendorf, Western North America Regional Merchandiser for the Chilean Fresh Fruit Association, said “Citrus from Chile and Kin’s Farm Market were very happy to see double-digit volume and sales increases over the previous season.” Chilean Citrus recorded a record crop this past season, shipping over 358,570 tons of mandarins, navels and lemons, an increase of 32% over 2017. North America continues to be the primary destination, receiving nearly 90% of Chilean citrus exports.